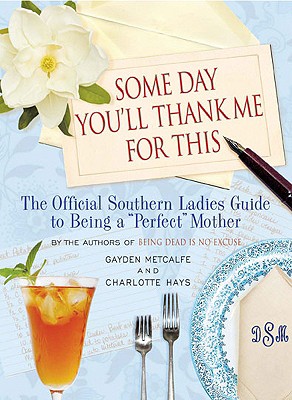 Some Day You'll Thank Me for This: The Official Southern Ladies' Guide to Being a 'Perfect' Mother

A hilarious guide to that incomparable creature--the Southern mother. Southern society is arranged along matriarchal lines, since the Southern matriarch is a far more formidable being than the much nicer Southern male. She has to be this way; she was put on earth with a sacred mission: to drum good manners and the proper religion--ancestor worship--into the next generation. In Some Day You'll Thank Me for This, Gayden Metcalfe and Charlotte Hays, bestselling authors of Being Dead Is No Excuse and Somebody's Going to Die If Lily Beth Doesn't Catch That Bouquet, deliver up a hilarious treatise--... View more info